PRIME Minister Sheikh Hasina asked the world community to take appropriate measures for sustainable repatriation of the Rohingyas for regional security and development, saying peace and harmony are essential for the prosperity of the region. “In terms of regional security, I would like to say that more than 1.1 million Rohingya citizens of Myanmar fled to Bangladesh in the face of persecution and they are a threat to the security not only for Bangladesh but also for the region. I urge the world community to take appropriate action realising the gravity of the threat,” she said. She was addressing while opening the three-day “Dhaka Global Dialogue–2019”. 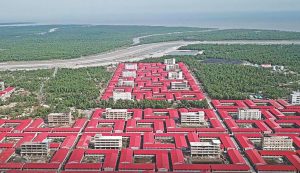 Bangladesh Institute of International and Strategic Studies (BIISS) and Observer Research Foundation, India are jointly organising the function. Over 150 delegates from over 50 countries are taking part in the dialogue to discuss and debate the most pressing global imperatives. Prime Minister Hasina added: “It will not possible to ensure development and prosperity of any country without having peace and safety.” She called upon all the countries of the region of the Asia Pacific and Indian Ocean for their collective efforts to this end. Foreign Minister Dr AK Abdul Momen, President of Observer Research Foundation, India Dr Samir Saran and Director General of Bangladesh Institute of International and Strategic Studies (BIISS) Major General AKM Abdur Rahman, also spoke at the function. A video documentary titled “Bangladesh were tomorrow belong” was also screened on the occasion.

More than 1.1 million Rohingya citizens of Myanmar fled to Bangladesh in the face of persecution and they are a threat to the security not only for Bangladesh but also for the region. I urge the world community to take appropriate action realising the gravity of the threat

Sheikh Hasina said, “The present century is being considered as the ‘Century of Asia’ in terms of socio–economic development and prosperity.” The prime minister however stressed the need for maintaining peace and harmony for the prosperity of the region. Terming poverty as the main enemy of the region, she said, “Therefore, the main goal of all our activities should be directed to eradicate people’s poverty and ensure their comfortable lives.”

Hon'ble PM Sheikh Hasina's keynote address at the #DhakaGlobalDialogue covers everything from the #SDGs to the future of the #AsianCentury.

Prime Minister Hasina said, there are 40 developing nations surrounding the Indian Ocean, where 35 per cent of the global population lives while six countries surrounding the Bay of Bengal, and few more countries like Nepal, Bhutan, the Maldives, Malaysia and Singapore have important impact of the Bay on their economies despite not being at the coast. 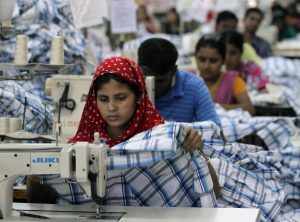 ■ RMG sector is a pillar of Bangladesh economy | Archive

She stated that half of the global container shipment and 80 percent of global fuel trade passes through the Indian Ocean while 16.8 percent of the global reserve of oil and 27.9 percent of natural gas is situated in this Ocean.

The Ocean consists of a number of vital maritime routes, which contribute significantly to the largest economies of Asia while 28 percent of the total fisheries are collected from Indian Ocean, she said. She also said there are various unconventional threats such as piracy, armed robbery, terrorist attacks in coastal and maritime areas, human trafficking, arm and drug smuggling, in the Indian Ocean and the Bay of Bengal region.

The premier called upon all concerned countries to strengthen bilateral and multilateral cooperation as well as partnerships to resolve all these problems.

Bangladesh became role model for other countries as it peacefully resolved the maritime disputes and land boundary agreement with neighbouring Myanmar and India. She advocated for cooperative, amicable, dignified and equitable relationship between coastal countries to extract maritime resources sustainably for the development of the — Blue Economy

“Bangladesh believes that such cooperation is needed to be inclusive for all and with the aim of everyone’s development and security. Bangladesh always exerts strong efforts to enhance peaceful and cooperative relations in the region of the Bay of Bengal and the Indian Ocean,” she said.

Prime Minister Hasina said Bangladesh became role model for other countries as it peacefully resolved the maritime disputes and land boundary agreement with neighbouring Myanmar and India. She advocated for cooperative, amicable, dignified and equitable relationship between coastal countries to extract maritime resources sustainably for the development of the ‘Blue Economy’.

But, the Bangladeshi PM expressed her stance against excessive extraction of marine resources, including fisheries and pollutions which are jeopardising the maritime environment. “Pollution and excessive extraction of marine resources are destroying the ecologies in the sea, damaging the overall environment of the world. As a result, threats are being created for human health and livelihood. It is not possible to resolve these crises by a single country,” she said. In this context, she said that every year, 8 million tons of plastic wastes are being gathered in the oceans and seas in the world.

Secondly the utilisation of maritime resources for the economic development of the country largely depends on the stability of the region as Bangladesh’s absolute sovereignty has been established over an area of 1,18,813 square km in the Bay of Bengal including 200 nautical miles, after reconciliation of maritime boundaries with Myanmar in 2012 and with India in 2014.

Referring to the main principle of Bangladesh’s foreign policy “Friendship to all, malice to none”, she said that Bangladesh follows the same policy in the area of maritime boundary and maritime economy. She said Bangladesh, due to its geographical location, is acting as a bridge between South Asia and South–East Asia. In this context, she said Father of the Nation Bangabandhu Sheikh Mujibur Rahman emphasised global peace and security for human welfare. She hoped “Dhaka Global Dialogue–2019” will act as a platform for the countries in this region on the way of achieving environmentally sustainable peace and prosperity.

Spelling out various measures for the development in various sector particularly in education, health, infrastructure development, climate change adaptation and digital Bangladesh, Prime Minister said, “Nowadays, Bangladesh is very often being termed as a ‘Miracle of Development’ in the international arena. Today Bangladesh is one of the fastest growing economies in the world.”

She said according to the World Bank, Bangladesh stands second in Asia and fifth in the world among the fastest growing economies while as per the IMF, Bangladesh has 30th largest GDP in the world in terms of PPP, adding, “This year economy of Bangladesh has exceeded 300 billion dollar mark.” Prime Minister Hasina said her government has been relentlessly working to make Bangladesh a developed and prosperous country free from hunger and poverty as dreamt by the Bangabandhu.