FRESH political migration of Bengali Muslims from different districts of the country to the three hill districts of CHT continues alarmingly. In the same way, Naikhyongchari, Alikadam, Lama and Thanchi Upazila (sub–districts) of Bandarban district bordering Arakan State of Myanmar and having high hills and mountains has been facing the problem of fresh migration of Bengali Muslims from different parts of the country as well migration of thousands of Rohingyas of Arakan state of Myanmar.

It is the geographical location largely shaken by the fast–changing geo–political situation has made CHT to be a global strategic point, which bears equal significance to all the democratic countries of the world. The trendy uprising of Islamic militancy in Bangladesh and alongside the on–going state–sponsored Islamisation in CHT indicate the gradual formation of common threat to peace and stability in the hills.

The Islamic militant groups have been continuing their extremist activities in CHT by taking advantage out of the existing communal situation. The international Islamic terrorist organisations have been providing support to the fundamentalist organisations in Bangladesh with an aim at turning Bangladesh into an Islamic state in true sense of the term.

Besides, the Rohingya Muslim militant groups are also active in the southern part of CHT. If the CHT region will turn into a complete Muslim–dominated area, the militants will make use the geographical advantage of the hilly region as rear ground for militant activities. And CHT will become a safe sanctuary for radicals.

For example, the Rohingya Solidarity Organisation (RSO) is active in Naikhyongchari upazila of Bandarban district and Ukhiya and Teknaf in Cox’s Bazaar district. Main base camp of RSO militants is situated at Douchari union of Naikhyongchari Upazila in Bandarban district. At least 20 militant outfits are trying to recruit documented as well as undocumented Rohingyas living in the districts of Chittagong, Cox’s Bazaar and Bandarban.

Rohingya Muslim militant groups are also active in the southern part of CHT. If the CHT region will turn into a complete Muslim–dominated area, the militants will make use the geographical advantage of the hilly region as rear ground for militant activities. And CHT will become a safe sanctuary for radicals

There is another temporary camp in the hills which is situated between Wasakhali Jhiri Aga (waterfall) and Chobokhyong Asakhyang Jhiri Aga (waterfall) in Torgu mouza under Naikhyongchari Upazila. It is 10 kilometres distance and in the north–east from Lemuchari BGB camp and 5 kilometres far in the east–south from Krokkhyong Chak Para, and 5 kilometres away in the north from Torgu Mukh (mouth) area. Sometimes, RSO armed elements stay at this camp.

Three Muslim villagers namely Wasakhali Bangali Para, Kolache Bangali Para and Dulujhiri Bangali Para are the supporters and selters of the RSO. Families of RSO members stay at these three villages. These villagers supply food and medicine, provide necessary information and give selter to RSO members. 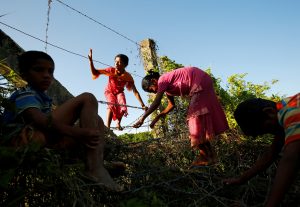 A few members of RSO comprising 40–50 persons spilt from main group. They stationed at Bakkhali Mamu–Bagina Jhiri under Bakkhali Dulujhir area of Bakkhali mouza of Baisari union in Naikhyongchari Upazila.

Indian security agencies independently took note of attempts by the Pakistan–based terrorist group, Lashkar–e–Taiba (LeT), to fund and train cadres of the Rohingya Solidarity Organisation (RSO) and other extremist groups, and recruit more from the camps in Cox’s Bazar.

This is worrisome because in the absence of educational and recreational facilities — barring occasional Bollywood music videos on mobile phones — the youth remain vulnerable to extremist propaganda. The RSO and another outfit, the Arakan Rohingya Salvation Army, have been frequently carrying out attacks against the security forces in Myanmar. Also, the Falah–e–Insaniyat Foundation, the LeT’s front organisation, has been engaged in relief work in camps, including in Kutupalong.

MEMBERS OF RSO STAYING IN BANGLADESH

The Rohingyas are, continuously and illegally, invading Bangladesh out of government statistics. An estimated 200,000 unregistered Rohingya refugees have settled among the local population, in slums and villages in many districts of Bangladesh including Chittagong Hill Tracts.

Huge number of them infiltrated in Naikhyongchari, Lama, Alikadam and Bandarban sadar upazilas under Bandarban district and Rajasthali and Rangamati sadar upazilas under Rangamati district. They were included in the electoral enrolment and issued fake Permanent Resident Certificate (PRC) and provided employment opportunities, which ultimately results in the eviction of the indigenous Jumma peoples.

The infiltration of Rohingya Muslims into different districts of the CHT again intensified following ethnic violence erupted in May 2012. They entered Naikhyongchari, Alikadam, Lama and Thanchi of Bandarban district through the porous land borders. Approximately more than 30,000 Rohingyas have been settled in Bandarban district alone.

Rohingya Muslims into different districts of the CHT again intensified following ethnic violence erupted in May 2012. They entered Naikhyongchari, Alikadam, Lama and Thanchi of Bandarban district through the porous land borders. Approximately more than 30,000 Rohingyas have been settled in Bandarban district alone

So far information received, the Rohingys have infiltrated in the following places in Bandarban and Khagrachari district.

one man and 19 children). They have been transferred to Kutupalong refugee camp in Cox’s Bazar district. 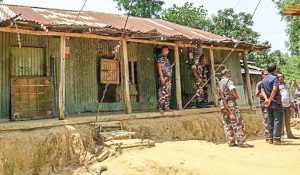 Rohingya Muslims with the help of administration settled down in Naikhyongchari Upazila and they are involved with land grabbing, robbery and criminal activities. They frequently harass indigenous villagers belong to Chak, Tripura, Marma and other ethnic groups

It is reported that RSO was involved to have attacked on Buddhist community in Ramu, Ukhiya and Teknaf on 29 September 2012. It is worth mentioning that Islamic fanatic groups including Jamaat–e–Islam, BNP and Awami League are involved to the Ramu attack on Buddhist community. However, Islamic militant groups active in Cox’s Bazaar and Naikhyongchari and RSO were mastermind of this communal violence.

It is also reported that RSO armed group made an attack on the Jumma villagers at Lamba Fari village of Ukyajai Headmen Para of Dochari union in Naikhyongchari upazila and looted valuables with gun point on 12 November 2012.

In June 2013, Rohingya armed militants numbering around 10–15 persons were seen at Rajvila and Udalbania area bordering to Rangamati, Bandarban and Chittagong districts. They committed robbery of three Jumma shops belonging to Aungsing Nue Marma of Taingkhali bazaar, Chingns Mong Doctor of Taingkhali bazaar and Suisau Marma (Master) of Rajvila area under Rajvila union in Bandarban district. They also raped a Jumma woman named Naima Marma w/o Chingsa Mong Marma at Rajvila area, but the incident was not come out due to social barriers.

Around 16/17 families of Rahingya have been living at Bangalhalia, 2 number area and Dhalya Muslim Para of Rajasthali upazila in Rangamati district. The militant elements generally take shelter at the houses of these Rohingya families.

On 14 May 2015 Saturday a Buddhist monk named U Damma Oaing Cha Bhikkhu alias Mong Chio Chak (73) was brutally hacked to death by the miscreants at Upar Chakpara of Baisari union under the Naikhyongchari upazila in Bandarban district. He dedicated himself to the path of spiritualism a couple of years ago and took the present name U Damma Oaing Cha Bhikkhu.

It is important to be mentioned here that thousands of Rohingya Muslims with the help of administration settled down in Naikhyongchari upazila and they are involved with land grabbing, robbery and criminal activities. They frequently harass indigenous villagers belong to Chak, Tripura, Marma and other ethnic groups. For example, the illegal land grabbers and Bengali–Rohingya miscreants equipped with firearms threatened the indigenous Chak families of Satgajjai Chak Para under Naikhyongchari Mouza of Naikhyongchari sadar upazila and consequently, the Chak families compelled to abandon their village on 14 February 2018. More 21 Chak families, for example, left their ancestral village of Badhujhiri Chak Para of Alikhyong mouza due to continuous torture, harassment, robbery, and illegal land grabbing by the land grabbers in April 2013. It is suspected that the killing of the monk could be carried out by the such vested group with the help of Rohingya militants to create terror among Chak community and to forced them to leave Baishari area.

On 13 May 2016 early in the morning, armed attackers stormed Ansar barracks at a Rohingya refugee camp at Nayapara in Teknaf Upazila under Cox’s Bazar district, killing the platoon commander Ali Hossain and injuring two others. The attackers also looted five Chinese rifles, two SMGs, four shot guns and 690 bullets from the armoury.

It is learnt that a group of 20–25 armed youths attacked the Ansar barracks at about 2:00 am. At that time, nine Ansar members were sleeping. Teknaf upazila is located some 86 kilometres south of Cox’s Bazar sadar and it is adjacent to Myanmar border. A victim of the attack claimed that he knows one of attackers who is a resident of Nayapara refugee camp and has a link with the Rohingya militant group. The Nayapara refugee camp near Teknaf town, two kilometres from the Myanmar border, is home to thousands of Rohingya refugees who fled persecution in Myanmar’s western Rakhine state.

On 20 November 2016 an armed group of Rohingyas abducted three Marma villagers namely Monghlaching Marma (45); Thuihlamong Marma (22) s/o Dhungkhiyong Marma, and Kyasing Thowai Marma (22) s/o late Othoai Marma when they went to fishing in the stream as everyday task. They did not return home.

It is learnt that on that day at 11:00 pm a group of RSO numbering 20–25 personnel with military dress surrounded the house of Mangal Kumar Tanchangya and apprehended him. The group of RSO took away him putting handcuff and handed over to another group after taking him 2–3 kilometres away from his house. The second group also handed over Mangal Kumar to another group after taking him around one and half kilometres. Then Mangal Kumar was kept at the remote hill named Sylhetchara area under Naikhyongchari sadar union (bordering to Gundhum union) where an RSO hideout exists. Sylhetchara is situated in between of Naikhyongchari BGB Camp and Chakdala BGB camp and approximately one and half kilometres away from both camps.

Soon after abduction of Mangal Kumar, his relatives and local Jumma villagers informed Chakdala BGB camp, Naikhyongchari police station, local DGFI and NSI personnel. After being informed, police opined that miscreants generally do not use handcuff, so the kidnappers could be militants and the BGB could know the abductors and the incident. Accordingly, police suggested contacting with BGB. With the persuasion of Chakdala BGB personnel, intelligence agencies, local Bengali leaders, finally RSO militants released Tanchangya in the evening of 31 December.

It is learnt that RSO militants who kidnapped Mangal wanted to know from the victim whether he had connection with Myanmar government or army. But Mangal denied having any such connection. Mangal Kumar Tanchangya said that he has been doing business taking goods crossing border for a long time and hence he frequently travels Rakhine state only for his business purpose. Due to his frequent visit to Myanmar, RSO militants might suspects him as a spy of Myanmar army and government.